In honor of the #ThrowbackThursday trend on social media, we are sharing one of our medical malpractice lawyer news articles from 1984. We found this article from The Post mentioning Ted Babbitt’s involvement in a North Palm Beach malpractice lawsuit against Good Samaritan Hospital and two surgeons. 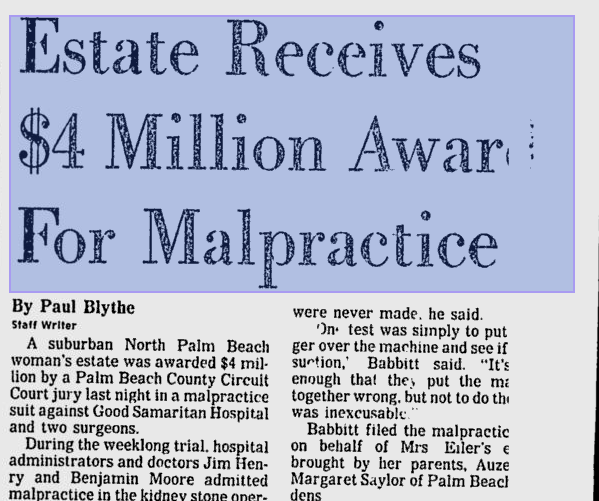 Hospital administrators and doctors admitted medical malpractice in a kidney stone operation that caused the death of a 39 year old mother.

The $4 million settlement was placed in a trust for her two children, aged 10 and 14 at the time.

Florida-based malpractice lawyer Ted Babbitt stated in the article, “I feel like the jury was making a statement that nothing like this should ever happen again, and both hospitals and doctors should exercise more caution when a human life is at stake.”

We been defending individuals and their families who have suffered personal injury since 1967.