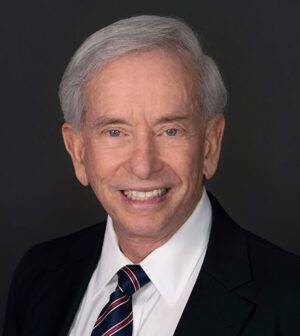 Ted Babbitt is an award-winning West Palm Beach Florida personal injury lawyer. He is a shareholder at Searcy Denney Scarola Barnhart & Shipley. In addition to winning personal injury and wrongful death lawsuits over the past decades in Florida, Ted Babbitt has won accolades and esteem. Since 1975, Mr. Babbitt has been a member of the Inner Circle of Advocates, an invitation-only group limited to just 100 of the top plaintiffs’ lawyers in the country. He is included in the Lawdragon Hall of Fame among the most renowned lawyers of his generation. He has written more than 100 articles that have appeared in national and local publications, given lectures for other attorneys, chaired nearly a dozen professional committees, and been listed – for more than 20 years — in The Best Lawyers in America©. All the while, he has successfully tackled some of the toughest personal injury cases in the state of Florida – and obtained numerous high-profile, multimillion-dollar recoveries for his clients. Most lawyers with credentials like these tend to oversee cases, letting junior lawyers do the legwork. That’s not Ted Babbitt’s style. Because he was selective about the cases he accepted, he was able to give each client the attention – and the resources – they deserved.

It’s a formula that’s enabled him to win cases against long odds – and win the respect of his clients. For Ted Babbitt, no detail is too small, and no opponent is too big. While other lawyers can spend years getting to the heart of their case, Ted sees it from the very start: helping his client seek redress – and accountability – for the harm they’ve suffered. That’s always the goal, and through the skill, preparation, and dedication that have made his name with his peers, Ted Babbitt has made a better future for his clients. Ted Babbitt is a commercial pilot and flight instructor with ratings in single and multi-engine as well as glider. He has logged more than 4,500 hours. His most recent plane was a twin-engine jet prop seating 8. He is credited with being instrument rated with certification from Flight Safety and has flown volunteer flights as an “Angel” to allow sick people to get needed treatment. He is also signed up for “Pilots and Paws” to do the same thing for injured animals.

This is an invitation-only group, limited to 100 of the best plaintiff lawyers in the United States. Prospective members must be nominated by the current members, pass a background and experience investigation, including reviews by leading lawyers and judges, and meet the rigorous requirements for membership. According to Inner Circle of Advocates, “The Inner Circle is an invitation-only group, limited to 100 lawyers of excellent character and integrity, representing people throughout the United States. To qualify, members must have tried at least 50 personal injury jury trials and at least 3 verdicts in excess of one million dollars or 1 verdict in excess of ten million dollars. Most of our members have won many multimillion-dollar verdicts for their clients.”

The International Academy of Trial Lawyers (IATL) is also an invitation-only group, limited to 500 trial lawyers worldwide. “The Academy is a group of truly elite trial lawyers representing both sides of the Bar: prosecutors and defense lawyers in criminal cases, and plaintiffs’ and defense counsel in civil litigation (including business and personal injury cases). While the majority of the Fellows come from the U.S., the Academy includes lawyers from more than 30 countries. Fellowship is by invitation only, and trial lawyers are invited to become Fellows only after an extremely careful vetting process,” states the IATL site. Ted has been a member of this elite membership since 1988.

American Board of Trial Advocates

Ted is also a member of the American Board of Trial Advocates, an invitation-only group of experienced trial lawyers and judges, dedicated to the preservation of the civil jury trial. He is a Life Fellow of the Palm Beach chapter.

The American College of Trial Lawyers (ACTL) is an invitation-only fellowship of preeminent trial lawyers from the United States and Canada. It is recognized as one of the top trial lawyers’ organizations in both the United States and Canada. According to the ACTL site, “Fellowship is extended only by invitation, after careful investigation, to those experienced trial lawyers who have mastered the art of advocacy and whose professional careers have been marked by the highest standards of ethical conduct, professionalism, civility and collegiality. Although there are currently more than 5,700 Fellows across the U.S. and Canada, membership can never be more than 1% of the total lawyer population of any state or province. Qualified lawyers are called to Fellowship in the College from all branches of trial practice. They are selected from among advocates who represent plaintiffs or defendants in civil proceedings of all types, as well as prosecutors and criminal defense lawyers. The College is thus able to speak with a balanced voice on important issues affecting the administration of justice.” Ted was invited to be a member of this organization in 1987.

Ted Babbitt was selected by his peers for inclusion in The Best Lawyers in America© 2021 for the following categories: 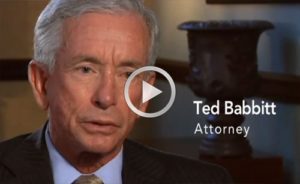 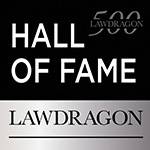 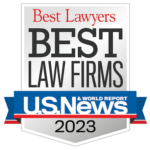