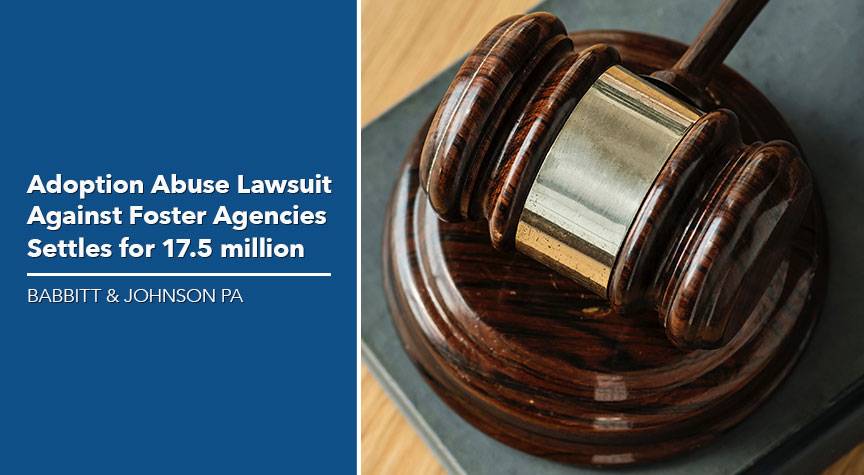 Ted Babbitt helped settle the well-publicized adoption abuse lawsuit against the Roman Catholic Foster Agencies in New York City. A New York Times article titled, “Eight in Adoption Abuse Case Agree to $17.5 Million Settlement with Foster Agencies” reported that the eight young adults named in the suit agreed to a $17.5 million dollar settlement against three private New York foster care agencies who had placed them in foster care with Judith Leekin, of Queens, New York. Leekin was later convicted of fraud and abuse charges and is serving a lengthy prison sentence. The original lawsuit was filed in 2009.

The New York Times also reported in December 2012 that New York agreed to pay $9.7 million to settle its portion of the 2009 lawsuit, including claims by two of the children; who had been placed with Ms. Leekin through a city-run adoption unit. The city denied liability in the case. Read that entire article here: http://nyti.ms/1wo4ZJG

The defendants in the suit are all private companies: HeartShare Human Services of New York, SCO Family of Services and the now-closed St. Joseph Services for Children and Families. The agencies denied liability throughout. The children, who are now in their 20s, had physical, emotional or developmental disabilities, including autism and blindness. Sadly, they were caught up in a broken down welfare system that allowed this type of fraud and abuse for so long.

Today, the adopted children continue to suffer from much more than their disabilities. According to Ted Babbitt, Plaintiff’s counsel, they still suffer a myriad of issues including post-traumatic stress disorder, homelessness, and suicide.

For the last 40 years, our Florida child advocacy attorneys have been committed to handling cases including representing those victimized in the foster system. We will continue to bring lawsuits against the parties that, through their actions or inaction, allow these children to be placed in harm’s way.

Consequently, if you or loved one has suffered abuse or injury at the hands of a foster care provider, it is important to speak with an experienced Florida child advocacy attorney in order to protect your rights.