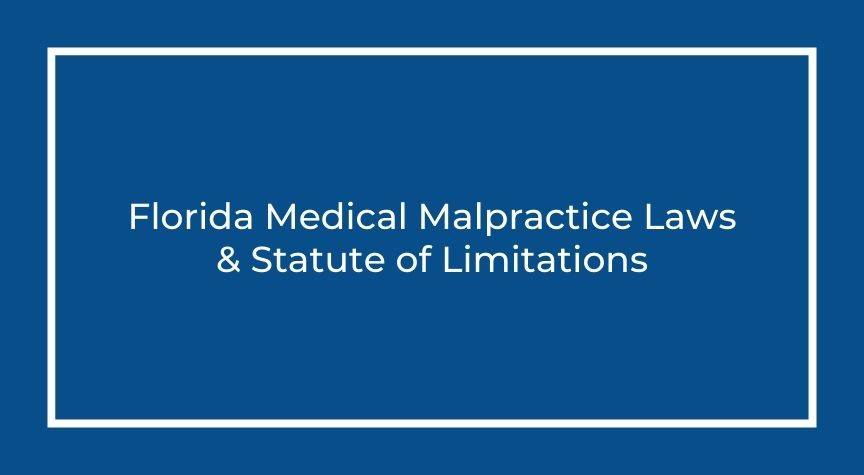 When handling a Florida medical malpractice claim, there are several factors to keep in mind including important timelines, procedures, and expectations to the law.

When a patient suffers an injury as a result of medical malpractice, there is a limited window of time in which they can file a lawsuit. Rules regarding these deadlines are known as the statutes of limitations and vary by state. According to Florida law, a person has two years from the date of the incident, however, if malpractice is not apparent when the incident is discovered they have a total of four years from the date of the incident to follow the suit.

Initial discovery refers to the moment the patient finds that malpractice has taken place. In most cases, discovery is immediate. For example, if a surgeon amputates a patient’s wrong limb, they would know upon waking from surgery, and the initial discovery would be the date of the surgery.

However, in Florida, a plaintiff must also follow the statute of repose which limits the window in which a person has to sue. A medical malpractice lawsuit must be filed no later than four years from the time of the incident, regardless of the amount of time it takes for the patient to realize that the incident had taken place. In most cases, a lawsuit filed after the four-year window would be thrown out in court.

There are some exceptions to the Florida statute of limitations for medical malpractice:

Prior to filing a lawsuit against a health provider, the plaintiff is required to notify all defendants of their intent to sue and provide an affidavit from a qualified doctor saying that there is malpractice. The notice must be delivered by certified mail, with a request for a return receipt and detailed specifics of the case as well as all parties involved including all other health care providers the plaintiff had seen within two years following the incident.

There are many factors that can complicate a medical malpractice lawsuit and it is important to find an experienced lawyer who will represent you with diligence.

If you have questions about whether your case involves medical negligence or malpractice, seek the help of Ted Babbitt, an experienced West Palm Beach, Florida personal injury attorney who can assist you in determining if your situation warrants legal action, and how to proceed if so. His team will give you an honest assessment of your case and explain your legal options. Fill out this online form or call today – (561) 375-2841.