The piece focused on Joe Johnson’s client, an Overland Park, Kansas woman who filed a lawsuit alleging her husband’s life-saving blood clot filter device that was meant to help him actually caused his death.

Johnson said in the interview “The fact that the filter actually dislodged and didn’t do its job is the only reason he died.” 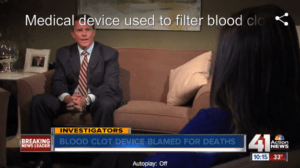 According to Action News, government data shows that the Bard IVC blood clot filter has been linked to at least 27 deaths and 300 problems. NBC news documents used in this new piece state that medical device manufacturer C.R. Bard hired an outside doctor to conduct a confidential study on its vena cava (IVC) filter called the Recovery filter.

The study found that the Recovery had higher rates of relative death, filter fracture and movement than all its competitors. A 2015 NBC investigation “Did Forged Signature Clear Way for Dangerous Blood-Clot Filter?” explains more details about these findings. McMaster reports that Bard did not issue a recall based on this information and instead sold about 34,000 of them before coming up with a replacement.

Joe Johnson points out in the interview that, “Mr. Benzing was actually implanted with the Recovery filter approximately one month after a new and improved filter was available, and in spite of that Bard never went to the hospitals and removed the old devices from the shelves.”

Hundreds of families with similar IVC filter stories are being represented by Johnson and his firm Babbitt and Johnson, P.A. If you or a loved one suffered a serious injury due to a defective IVC filter, contact our IVC filter lawyers today to discuss your case.

You and your family may be entitled to financial compensation to help with medical costs, lost wages and other expenses. Babbitt & Johnson, P.A. has a proven record of success in handling cases involving defective medical devices, nationwide. We hold medical device manufacturers accountable for their defective products.