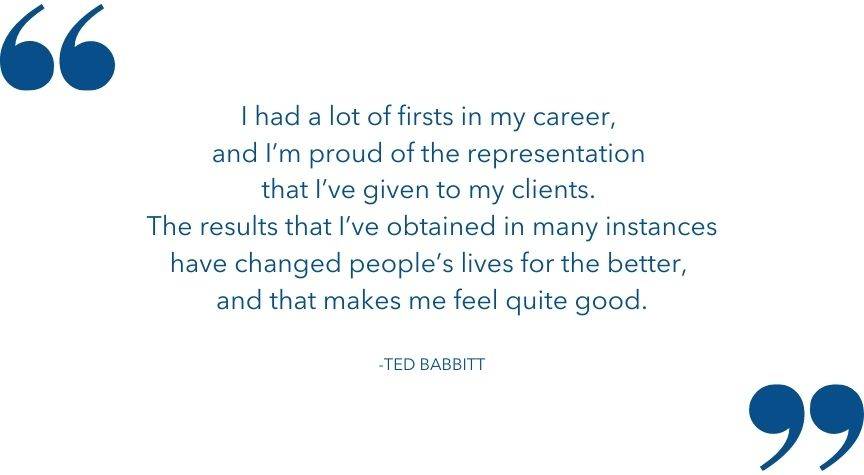 Ted Babbitt has been a personal injury lawyer for over five decades, successfully tackling some of the toughest personal injury cases in the state of Florida – and obtaining numerous high-profile, multimillion-dollar recoveries for his clients.

“I had a lot of firsts in my career, and I’m proud of the representation that I’ve given to my clients. The results that I’ve obtained in many instances have changed people’s lives for the better, and that makes me feel quite good.’’
– Ted Babbitt

Ted Babbitt has had a dynamic career having turned his life around to become one of America’s top trial lawyers. From being a juvenile troublemaker to entering the Marines (Ted says the Marines was the best thing that ever happened to him) to a college student whose counselor told him he would not amount to much, now Ted is one of the top 100 Plaintiffs Attorneys in the U.S. He has won landmark personal injury cases including wrongful death, medical malpractice, hospital negligence, defective devices, auto accidents, and more.

For over 45 years, Ted has been a member of the Inner Circle of Advocates, an invitation-only group limited to 100 top plaintiffs’ lawyers in the United States. He has been named to the International Academy of Trial Lawyers, a group of just 500 of the world’s preeminent trial lawyers, and is a member of The American College of Trial Lawyers, one of the field’s most prestigious and selective associations. Mr. Babbitt is one of just a handful of Florida personal injury lawyers who have been named to all three of these prominent organizations – and has been listed in The Best Lawyers in America every year since that publication’s inception.

In addition to winning lawsuits over the past four decades, Ted Babbitt has won accolades and esteem. He has been interviewed extensively by the media, including being on Oprah. He has written more than 100 articles that have appeared everywhere from the Palm Beach County Bar’s publication to national magazines. Babbitt also served a term as president of the Palm Beach County Bar Association and was vice president of the Legal Aid Society of Palm Beach County. He was a founding board member of Florida’s Children First, an advocacy nonprofit, and was instrumental in 1997 in opening doctors’ disciplinary records to the public.

Most lawyers with credentials like Ted Babbitt’s tend to oversee cases, letting junior lawyers do the legwork. That is not Mr. Babbitt’s style. He gives each client the attention – and the resources – they deserve. It’s a formula that’s enabled him to win cases against long odds – and win the respect of his clients.

For Ted Babbitt, no detail is too small, and no opponent is too big. While other lawyers can spend years getting to the heart of their case, Ted sees it from the very start: helping his client seek redress – and accountability – for the harm they’ve suffered. That’s always the goal, and through the skill, preparation, and dedication that have made his name with his peers, Ted Babbitt has made a better future for his clients.