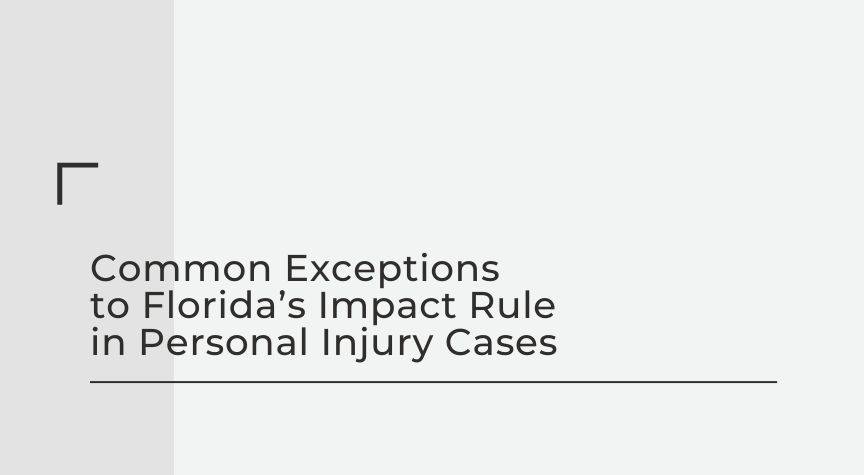 When it comes to claiming damages in a personal injury case for emotional or mental distress, different states operate by different rules. Florida follows the Impact Rule, in which a victim can only claim damages for emotional distress if they are the direct cause of a physical injury in a case.

Ted Babbitt wrote there are many exceptions to the Impact Rule, which Florida has modified over time to fit certain scenarios. It’s important to note these exceptions because, though Florida does adhere strictly to this rule, you could be entitled to claim damages around emotional or mental distress from an accident or incident.

Injury of a loved one.

If someone suffers emotional distress after seeing a close family member sustain a significant physical injury, they are entitled to claim damages. The severe injury or even death of a loved one in a car crash are examples of this exception. Note that such claims are only allowed if the relative has witnessed the actual death or physical injury of their loved one firsthand. Simply hearing about the incident is not sufficient.

Florida courts also deem the inhalation of asbestos fibers an exception to the Impact Rule. Inhaling asbestos fibers over time, such as on the job or while attending school, can cause severe lung damage, which is sufficient enough to count as physical damage in a personal injury case.

Individuals can claim emotional distress if they are diagnosed with HIV then prescribed caustic medication such as Zidothymidine (commonly referred to as “AZT”) from which they then suffer bodily injury. Note, however, that the Impact Rule does not apply when a patient is misdiagnosed as HIV positive, as was debated in a famous Florida case in the 1980s.

The Florida Supreme Court has determined that where a psychologist has breached their fiduciary (that is, legal and ethical) relationship with a patient, that patient is entitled to emotional damages, despite the lack of physical contact between the two parties.

There are still many cases in which the Impact Rule does not apply in the state of Florida, including defamation, invasion of privacy, intentional infliction of emotional distress, or the aforementioned HIV misdiagnosis. While Florida has made many changes to this rule over time, it can be tricky to understand when you are or are not entitled to sue for emotional damages.

Working with an experienced personal injury attorney can clarify much of the confusion around this ever-changing law. Please reach out to Ted today to discuss your case.