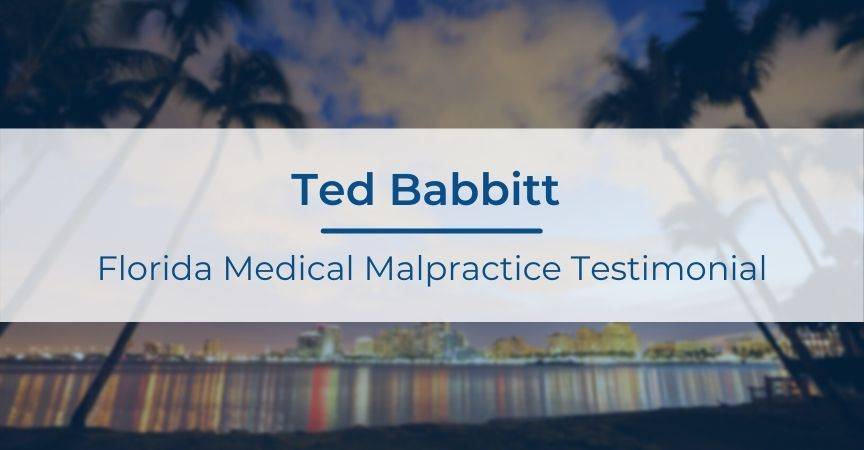 “I am so grateful that Ted is on my side.”
-Michael Lawley, Client of Ted Babbitt

When no other lawyer was willing to take Michael’s case, Ted Babbitt stepped in and fought for the justice that he deserved.

“My daughter was not feeling well and had her boyfriend drive her to the hospital. She needed to be in the ICU but they didn’t have any beds available. So, they billed her insurance company for being in the ICU even though she wasn’t in the ICU until the next day. By that time, it was too late, she remained in a coma for about a month and then she died. My daughter, because she was single with no dependents and over the age of 24, she was considered a free kill under Florida Law.

I talked to a lot of attorneys, no one would help me, and they said you’re not going to find anybody, because of who Ted is, he saw that there was a case there, a call for justice. There was something done that was terrible, wrong and despite the fact that the law was crafted to prevent victims from getting justice, he wasn’t just willing to accept that. He was willing to fight the good fight to get the justice the facts called for.

I was so grateful to have Ted Babbitt on my side. The whole thing has been an uphill battle and yet there he is, sword in hand, maybe I should say machete in hand.”

For Ted Babbitt, no detail is too small, and no opponent is too big. While other lawyers can spend years getting to the heart of their case, Ted sees it from the very start: helping his client seek redress – and accountability – for the harm they’ve suffered. That’s always the goal, and through the skill, preparation, and dedication that have made his name with his peers, Ted Babbitt has made a better future for his clients.

“A good attorney is one that is willing to take on a good fight, regardless of the odds and he is willing to do that. He is a hard worker and I don’t know if you could find a better attorney, but I couldn’t.”

Ted Babbitt is an award-winning attorney and a top West Palm Beach, Florida personal injury lawyer. Having served the entire state of Florida and parts of the U.S., he has a proven track record that spans five decades. You can be sure your case is in the best possible hands. Call Ted today at (561) 375-2841 or fill out the online form to schedule a free, confidential consultation to discuss your case and see how he can help you.