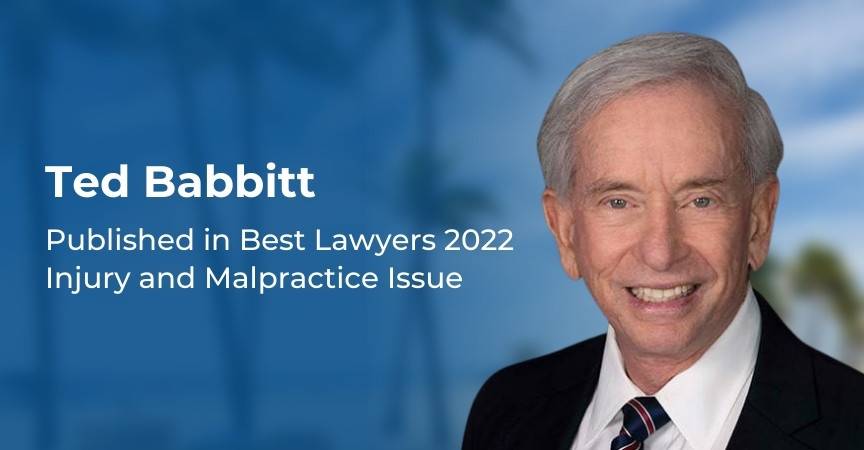 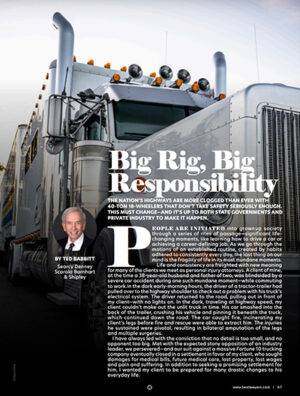 Ted Babbitt is published in Best Lawyers Magazine’s 2022 Injury and Malpractice Issue, highlighting a case that brings attention to the growing concern of preventable truck accidents along Florida’s major roads and highways.

Ted’s article, entitled “Big Rig, Big Responsibility,” discusses his case involving a then 38-year-old husband and father of two who sustained life-threatening injuries in a truck accident that occurred during his regular early-morning commute to work. A truck with no working lights pulled out in front of him from a shoulder on Interstate-95. The man’s car slammed into the rear of the truck where it become lodged and caught fire. The driver underwent life-saving surgeries including amputation of both his legs. The case was ultimately successfully brought to settlement, and Ted’s client is on the road to recovery.

Interstate-95, where the accident took place, is known by Floridians and law enforcement as the most traveled road in the state, seeing upwards of 300,000 vehicles a day. With a range of four to twelve lanes of traffic and a posted speed limit at 70 miles per hour, I-95 is ideal for transporting goods throughout the state and to and from its many ports. Between moving goods and a bustling economy boosted by population growth, it’s no surprise that Florida’s I-95 sees hundreds of truck accidents annually. Ted’s article pinpoints both obstacles and solutions that state and local agencies are working to resolve.

Many of the clients who reach out for legal support following a tragic accident are scared, unsure of what to do, and overwhelmed by the stress of mounting medical bills. Personal injury attorneys have a unique opportunity to not only fight for justice on behalf of those who deserve it most but create a vision of the attainable future through hope and commitment.

“Looking back today, my client speaks of strength, greatness and perseverance as well as how crucial it is to surround oneself with supportive people during the healing process. I’m tremendously grateful to have witnessed such courage throughout my career.”

Ted Babbitt’s remarkable career as an advocate for individuals who are hurt by negligent drivers and large, profit-driven trucking companies has led him to build relationships with incredibly resilient individuals who overcome immense pain and suffering as they rebuild their lives. As an award-winning West Palm Beach, Florida, personal injury lawyer Ted has taken on some of the toughest trucking companies and has obtained some of the largest recoveries ever seen in Florida. To learn more about Ted, or to schedule a free consultation, contact his West Palm Beach, Florida office.