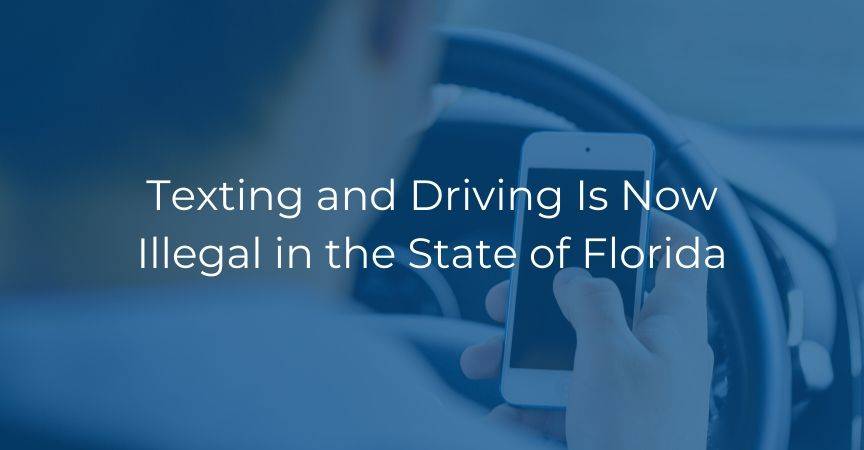 With beaches, restaurants, gyms, and more open for business after weeks of state-mandated shutdowns, more Floridians are getting behind the wheel again to drive to these destinations. That makes now a good time to remind everyone of new enforcements around the Wireless Communications While Driving Law that went into effect on January 1, 2020, and makes the act of texting while driving a primary offense.

The Wireless Communications While Driving Law was actually introduced on July 1, 2019. However, it was considered only a “secondary” offense at the time, meaning drivers could only get a citation for texting and driving if they were stopped for another offense, like speeding.

The law’s status changed on January 1 of 2020 and texting while driving is now considered a primary offense. In other words, you can and will get pulled over for doing it. According to Florida Highway Safety and Motor Vehicles (FLHSMV), “A person may not operate a motor vehicle while manually typing or entering multiple letters, numbers or symbols into a wireless communications device to text, email and instant message.”

As you prepare to get back on the road regularly, whether for work, the gym, or visiting friends, be sure you understand how the new law changes what you can and cannot do with a phone when behind the wheel. These changes are also important to know in case you are involved in an accident with someone who was texting and driving.

What is the Wireless Communications While Driving Law?

According to FLHSMV, the Wireless Communications While Driving Law, section 316.305, Florida Statutes, prohibits drivers from using handheld devices while driving. Further, it “allows law enforcement to stop motor vehicles and issue citations to motorists that are texting and driving” and prohibits drivers from “using wireless communications devices in a handheld manner in school and work zone.”

What is considered a handheld device?

A handheld communication device is any device that can be used with your hands and is meant to receive or send a text-based message. That includes cell phones, tablets, laptops, e-readers, and gaming devices.

Why is texting while driving dangerous?

Texting while driving is considered a form of “distracted driving.” Normally, there are three categories of distracted driving: visual, manual, and cognitive. Texting falls into all three of those categories since it requires you to look at the phone, use your hands, and pay attention to the message, rather than the road.

Taking your eyes off the road for just 5 seconds when driving at 55 miles per hour is the equivalent of driving the entire length of a football field with your eyes closed, according to the National Highway Traffic Safety Administration. This makes texting and driving an especially dangerous form of distracted driving.

What are the penalties for texting and driving in Florida?

In a school or work zone, not using a device handsfree is an automatic $60 fine and three points against your driver’s license.

Note that these fines do not include any court costs or other fees that might be associated with getting a ticket.

It’s important to know these factors not only for your own safety but also in case you are involved in an accident and suspect the other person caused the crash because of texting and driving. In that scenario, you may be able to file a claim for damages.

Were you hit by a texting driver?

Florida car accident attorney, Ted Babbitt has a long history of handling cases involving automobile accidents, including those where new technologies are involved. Contact him to get your questions answered. He will give you an honest assessment of your case and explain your legal options.