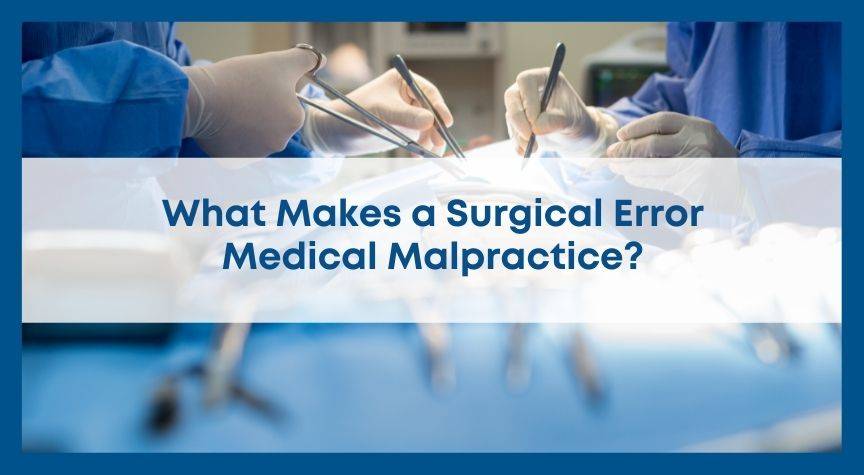 At least 4,000 surgical errors occur in the U.S. every year. These are considered preventable errors that usually happen unexpectedly — though they aren’t always considered medical malpractice.

Common examples of surgical errors include (but certainly aren’t limited to):

The reasons for such errors vary. The surgeon may be inexperienced or overworked and fatigued. There might have been poor communication between members of the medical team performing the surgery, or poor processes in place at the hospital. In some cases, drugs and/or alcohol could be present. In still others, the doctor and their team may simply not be paying as close attention as they ought to be.

However, not all of these scenarios are considered medical malpractice. Doctors, after all, are human, and mistakes can happen for any number of reasons. When one occurs, it isn’t automatic proof that a medical team was negligent or had intent to harm the patient. In order for a surgical error to be considered medical malpractice, you must be able to prove that the mistake fell below the medical standard of care and that you were harmed by the error.

The standard of care is the level of service that the average physician or healthcare team would give to a patient. When a doctor performs a surgery, they are expected to do so at the same level that any other reasonably competent physician in the United States would. Typically in a medical malpractice lawsuit, an expert witness with similar experience to the defendant’s would be required to help establish the standard of care in the case.

Besides the standard of care, you must also be able to establish that you were harmed during the surgery and that the injury came directly from a sub-standard level of treatment. Some types of surgeries are just inherently dangerous, and patients are expected to sign an informed consent document acknowledging the risks. Surgical errors that fall into the malpractice category are outside of the risks mentioned on an informed consent form.

If you acknowledge the risks of a surgery and still believe the standard of care was breached, the right attorney may be able to get you the maximum amount of compensation you deserve. Ted Babbitt is an award-winning attorney and a top West Palm Beach personal injury lawyer. Having served the entire state of Florida and parts of the U.S., he has a proven track record that spans five decades.

Call Ted today at (561) 375-2841 or fill out the online form to schedule a free, confidential consultation to discuss your case and see how he can help you.