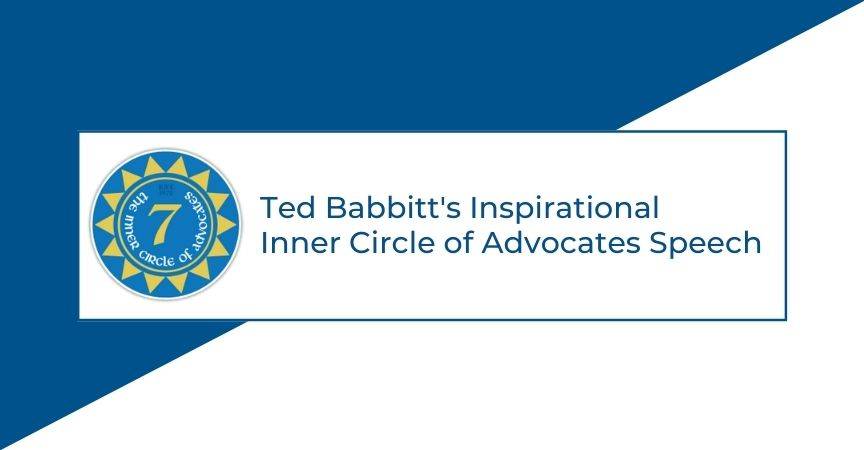 Ted Babbitt tells the story of how he overcame the obstacles in his life to become one of America’s top trial lawyers in this speech he gave to his fellow Inner Circle of Advocates members in Ireland on August 10, 2019.

Ted’s route to becoming a top trial lawyer was not typical. In order to circumvent juvenile detention, Ted volunteered for the Marine Corps at just 17 years old. After 7 years in the Marine Corps Reserves, Ted decided to attend Palm Beach Junior College where his counselor told him he would not amount to much. Ted discovered something about himself; he does not like people telling him he can’t do something. He went on to complete junior college, then on to the University of Florida and finally law school, finishing 7 years of college in only 5 years.

At the beginning of Ted’s career as a West Palm Beach personal injury lawyer, no one was taking medical malpractice cases. In 1968 Ted took on the first medical malpractice case in Palm Beach County. The brain injury case resulted in a verdict of $120,000 –  the largest verdicts at that time – Ellington vs. Good Samaritan Hospital. Then in 1974, Ted took the case of Tally vs. Schwab, which resulted in a $1.68 million verdict and got him invited into the Inner Circle of Advocates as the youngest member at 33 years old, today he is the longest-serving member.

We don’t like people to tell us we can’t win something, or can’t do something… We’re not going to give up.
– Ted Babbitt

Ted Babbitt has had a dynamic career due to his hard work and dedication. He is one of the top 100 Plaintiffs Attorneys in the U.S. and has won landmark personal injury cases including wrongful death, medical malpractice, hospital negligence, defective devices, auto accidents, and more.

Ted Babbitt has successfully tackled some of the toughest personal injury cases in the state of Florida – and obtained numerous high-profile, multimillion-dollar recoveries for his clients. In addition to winning lawsuits over the past four decades, Ted Babbitt has won accolades and esteem. He has been interviewed extensively by the media, including being on Oprah. He has written more than 100 articles that have appeared everywhere from the Palm Beach County Bar’s publication to national magazines.